Solar energy, with its advanced technologies, is an inexhaustible source of power. Along with the growing deployment of photovoltaic panels in metropolitan and Overseas France — where the high sunshine levels are particularly suitable for this energy production method — an industry has formed to carry out the obviously essential task of recycling the panels as part of their life cycle management.

Solar energy is clearly on the rise in France: from 55,000 tonnes of panels installed in 2016, this figure rose to 84,000 tonnes in 2017 (article in French). During the same period, Albioma bids won contracts for generating 10 MW of power — also showing the dynamism of the market. The life of the panels is currently estimated at a minimum of 30 years, and this figure could rise still further. The first models, which were produced in the ’80s, had a lifetime of approximately 25 years. It is these panels, along with faulty or broken ones, that must now be recycled.

Their recycling is governed by the European Union waste electrical and electronic equipment directive (WEEE) and so is mandatory. In France, it is the PV Cycle eco-organisation, which is approved by the public authorities, that manages the administrative and operational aspects. In direct contact with the panel manufacturers, it proposes around a hundred free collection points throughout France and manages the transport of the panels to the recycling plants. The association, which collected 700 tonnes of crystalline panels in 2017, plans to collect 1,600 tonnes of them in 2018. In ten years, this figure is expect to climb to 30,000 tonnes.

The biggest solar panel recycling plant is in France

Because there was no recycling industry in France, until now most French used panels were sent to Belgium where only the glass they contained was recycled. They are now recycled more fully in France by Véolia, which won the tender organised by PV Cycle and opened a recycling plant at Rousset in Southern France in July 2018. The team promises to recycle 90-92% of waste in the plant. This figure rises to 95% if we include energy recovery. The recycling plant processes silicon panel models, which represent 90% of the market and most solar panels used by Albioma.

What can be recycled in a solar panel

75% of these panels consists of glass, a material that can be recycled an infinite number of times. This is also true of the aluminium used to make their frame. But the panels also contain other recyclable materials: a plastic film that can be transformed into granules (either for melting or for burning to generate electricity), silicon cells and electrical conductors (in aluminium, silver or copper). The cells and conductors are separated mechanically and chemically before being melted and then reused. The prospects for solar panel recycling now seems bright, ensuring a healthy future for an industry essential to the emergence of a zero-carbon renewable energy. 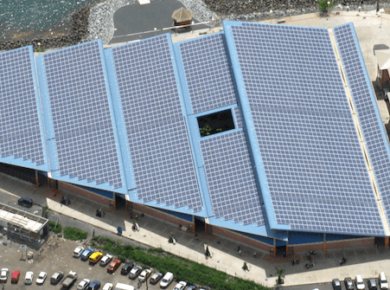