In 2018, the world’s cumulative renewable energy production capacity reached 1 TW, attesting to this market’s strong growth, and solar energy in particular. An inexhaustible energy source available worldwide, solar energy is a suitable resource for producing electricity without emitting greenhouse gases. Albioma has been the leading producer of photovoltaic energy in Overseas France since 2006. Our photovoltaic power plants are built in areas with the highest sunshine levels such as in the Indian Ocean, the Caribbean, Guyana or the South of France. How these facilities actually work?

Inside a photovoltaic power plant 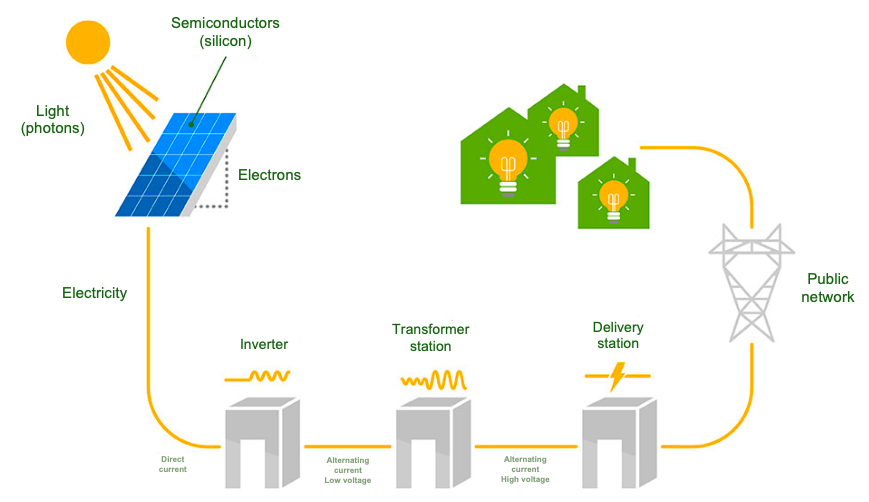 Solar panel operation depends on the photovoltaic effect, a physical phenomenon based on the ability of certain materials called semiconductors to transform the sun’s energy into electricity. The best known of these is silicon, a component present in every cell in the panels. Under the action of light, and more precisely, photons, silicon releases electrons, generating an electric current that is then converted into an alternating current by an inverter before being reinjected into the network. Albioma operates a photovoltaic park generating a total of 90 MW in metropolitan and Overseas France. The most powerful of these plants is in Guyana, where the Group leads the industry with panels generating 16 MW of power. However, its annual production is not enough to supply electricity to all homes served by the network, hence the need for another source of energy. 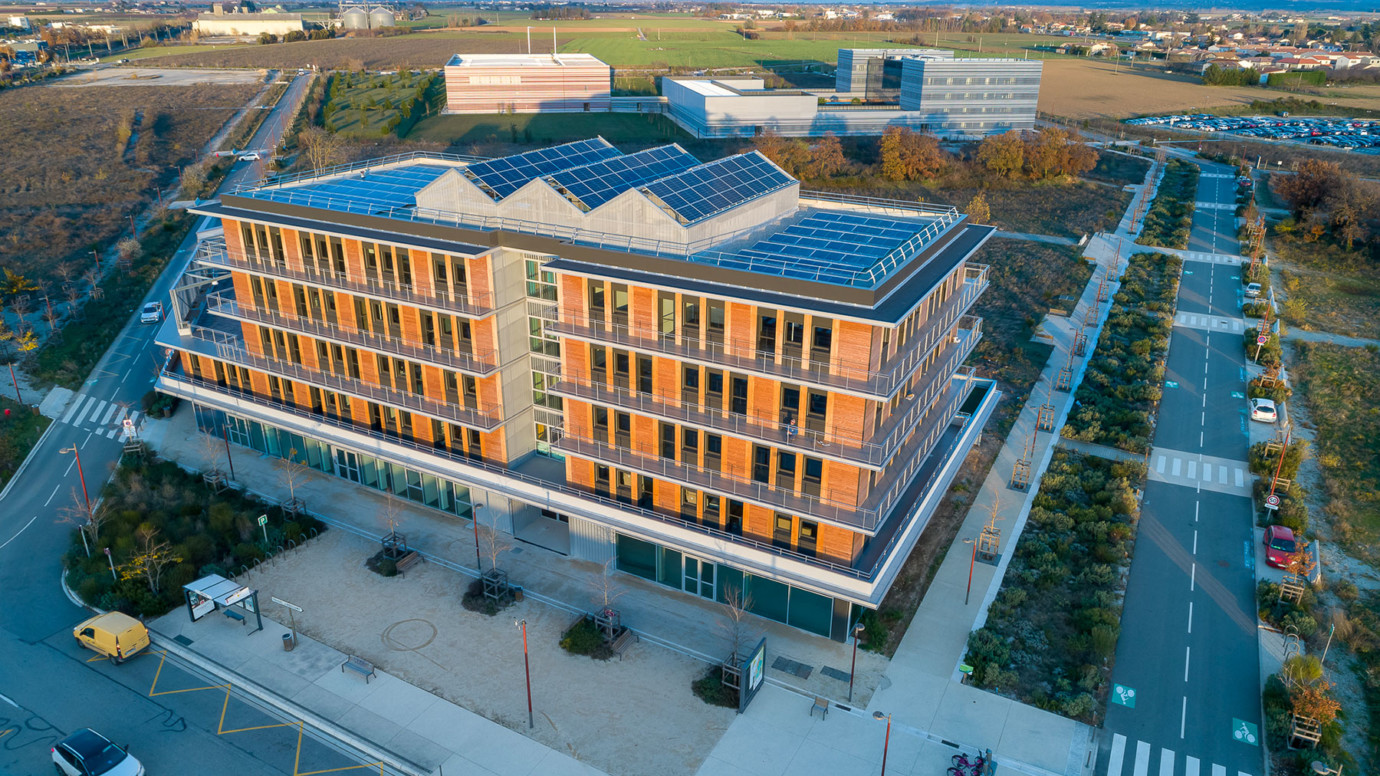 Located near Valence in South-East France, the Patriarche self-consumption power plant was opened at the end of 2018

To reduce interruptions in the supply of solar energy, the photovoltaic power plants developed by Albioma can include storage if necessary (see video above). Combined with software that generates weather forecasts, this technology partly compensates for fluctuations in the energy source, the efficiency of which is based on sunshine levels. In Réunion Island for example, our power plants in Port Ouest and at the E. Leclerc shopping centre are equipped with lithium-ion electrochemical batteries. The batteries store energy during the day for reinjection during peak consumption later.

The Port Ouest solar energy power plant, which was commissioned in November 2018, occupies a rooftop area of 10,600 m² and consists of 7,623 m² photovoltaic modules. It has an installed capacity of 1339 kWp and operates continuously thanks to a storage battery system that enables energy to be sold on the network during evening peak consumption periods. 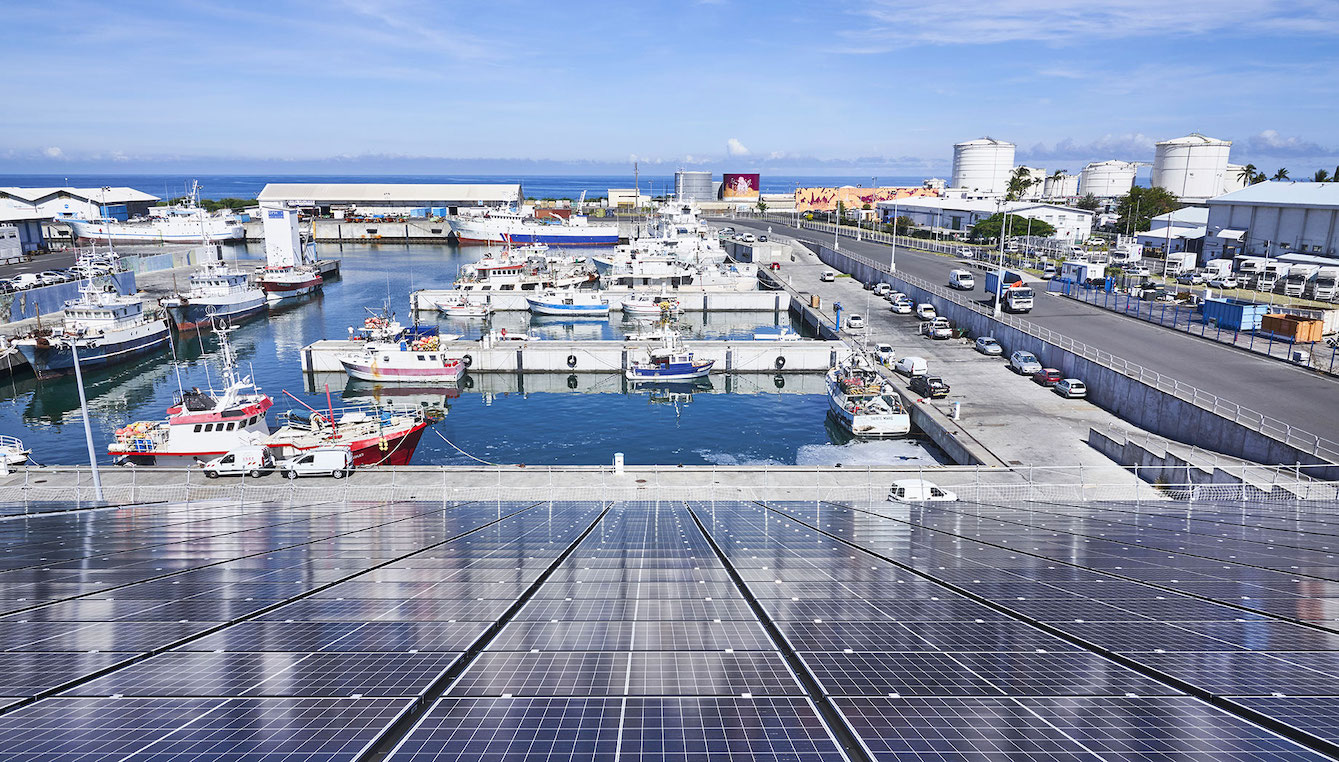 Environmental protection is central to our projects

The growth of solar energy in Overseas France also depends on the land available. Half of the 150 power plants operated today by Albioma are at ground level, on land carefully selected first to avoid any conflicts with competing uses such as rearing livestock or growing crops. The other half is located on rooftops, like those around the courtyard of Iris Hoarau School in Réunion Island.

Particular attention is also paid to the recycling of end-of-life or faulty solar panels, which is strictly controlled by the European Union waste electrical and electronic equipment directive (WEEE). In association with the PV Cycle eco-organisation, which is approved by the public authorities, each Albioma solar energy generation company is authorised to collect these items for processing by a partner company at a plant in Southern France, where 90-92% of the components are recycled (glass, silicon, aluminium, etc.). Lastly, all of the Group’s solar energy activities are governed by strict standards relating to the environment, occupational safety and health and quality management, as shown by the fact that it has obtained ISO 9001, ISO 14001 and ILO OSH 2001 certification (article in French), the benchmarks in these domains. 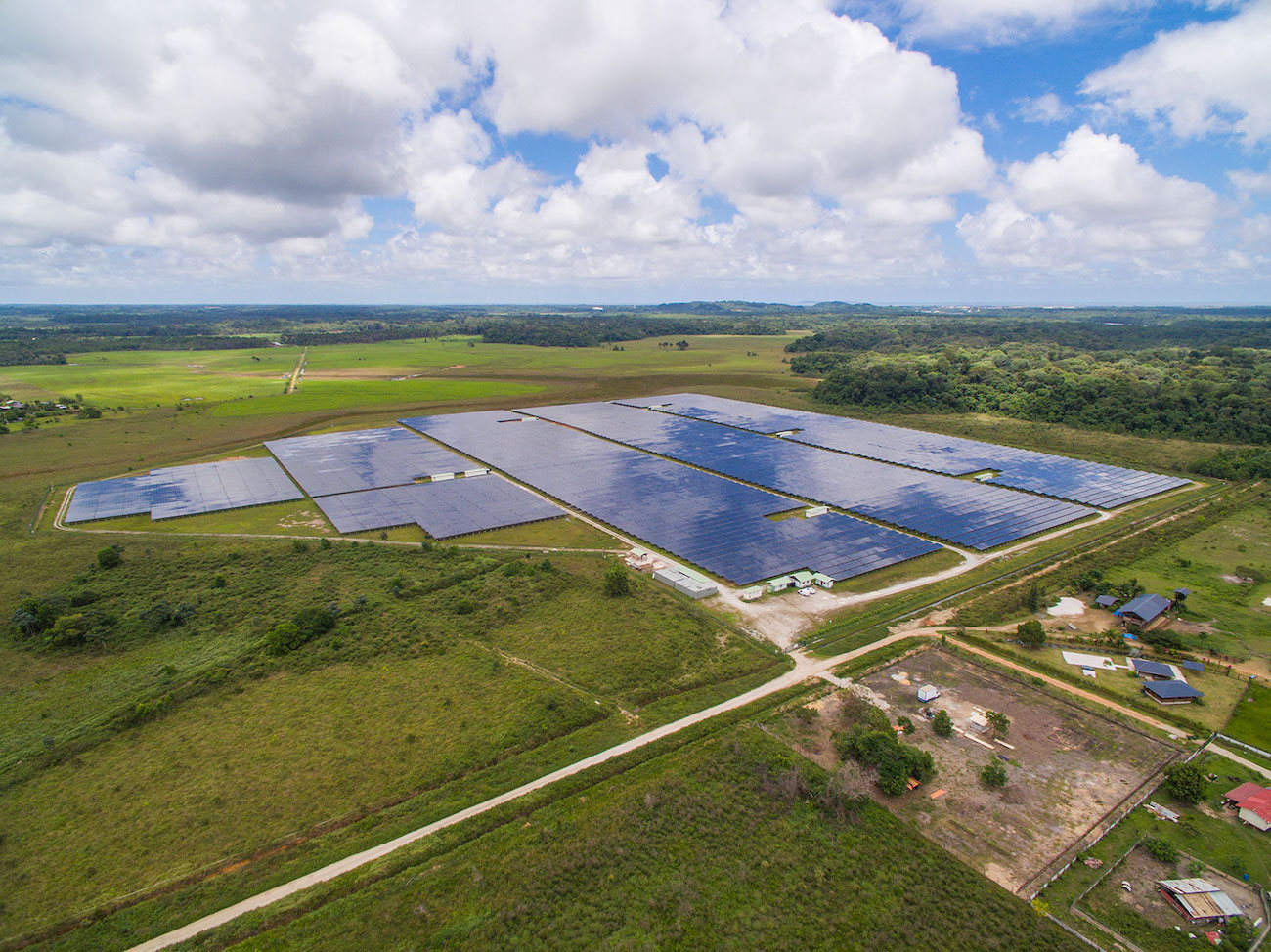 Towards the future, acting to promote sustainable development

A reliable, low-carbon and easily-deployed renewable energy, solar energy is growing rapidly thanks mainly to technological improvements. At Albioma, solar energy production is stepping up, including the installation of new, 100% renewable energy production plants this year: for example, the Group’s photovoltaic park is expanding in metropolitan France with the acquisition of Eneco France, the Grand Port Maritime power plant is being built in Réunion Island (1.4 MWc), solar panels are being set up on a waste storage site in Guadeloupe (3.3 MWc), a partnership has been signed with the public housing company of Réunion Island (SHMLR), etc.

Under the partnership in Réunion Island, for example, Albioma will build 51 photovoltaic power plants on the rooftops of public housing blocks. The work began in the second half of 2019 and, in addition to producing electricity, should provide the buildings with better insulation against the effects of solar radiation. Solar energy therefore has a bright future, as Anthony Lucas, PV manager in the Indian Ocean region, says: “Our objective is to continue our efforts to develop the photovoltaic sector by increasing our energy production capacity in all areas in which we operate.”

Albioma, a driver of local economic and social development